Last night, storyteller Peter Chand performed his show Grimm’s Sheesha at Dreamfired in Cumbria, and it was bloody brilliant.

A sheesha is a mirror, and you probably all know about the Brothers Grimm; throughout the 19th Century, brothers Wilhelm and Jacob Grimm collected and published folk stories from across Germany and beyond. Their books preserved many – if not most – of our classic fairytales. When they feel so intrinsically European, hard-wired into grey stone and rain and winter, it’s crazy to discover that threads of those same tales have existed in India for centuries. In retrieving and retelling the original stories, Peter’s show gives the Grimms an Indian incarnation – or, more accurately, reflection – and hence the titular sheesha.

Just like people, stories evolve as they travel, building on a core, becoming something new, fitting themselves around each new place. The same elements are plain to see in the fairytales of both cultures – family discord, revenge, blood, luck, magic – but Peter’s stories explode with language and laughter. His characters flit between between Punjabi and English – sometimes with translations, sometimes without – and the seamless interplay of both languages is dizzying, dazzling, mesmerising. The stories balance violence with humour, using voice and movement and body language and expression to conjure holy men and jealous sisters, gods and donkeys, poison and pakora, loom shuttles, bloody shawls and magic mango stones.

It was an electrifying show and an inspiring night. By the end of the performance, my face ached with so much smiling and laughing. I can’t do it justice; hunt down Peter Chand and hurl yourself headfirst into his stories.

I’m fascinated by the evolution of stories, and it was a delight to chat to Peter after the show and hear more about how he’d found and developed the show – and how the show had then evolved again, changing around him with each new performance. His medium is more dynamic than mine, but that idea of evolution is something I can understand; it’s there in my inability to let go of written work, returning to it time and time again, even years after publication, tweaking and cutting and expanding, improving, building towards something ever new. We also spoke about his performance style, which is both relaxed and spontaneous – at one point he said “Bless you” to an audience sneeze without breaking the suspense – and he was kind enough to give me some advice on how to improve. I’ll never be a storyteller of his calibre, and that’s not really where I want to take my work – but I absolutely strive to read and perform my stories with greater confidence, and it was useful to talk to a master! Peter also put me onto Festival At The Edge – the country’s oldest storytelling festival – which I think we’ll try and attend next year.

As a tangent to all this, my friend (and real-life Lovejoy) Ben Piggott claims there are actually only two stories:

I’ve tried, but I can’t think of a story worth its salt where one or both of these sound hollow. And yes, they’re vast catch-alls, but that’s okay, because they’re also entirely true.

For a number of reasons, I’ve stalled on the novel redraft since discussing Freedom. As of today, I think I’ve found a way back into the light – but I need to brew on it for a couple of days, so that’s for another post. For now, here’s an illustration from The Old Woman In The Wood.

Well, that’s my first Dreamfired done and dusted. It was a really good night – more people need to know about the Storynights.

First up was banjo virtuoso Bill Lloyd. He’s a legend in Cumbria and the north, and he didn’t disappoint, starting with a haunting ‘Wayfaring Stranger’, and segueing into a range of folk songs from America and Ireland. My storyteller uncle Rich Sylvester had the next slot, relating an anecdote about exploring the London Olympic equestrian venue at midnight with a bellyful of Russian beer. It was very funny. Rich is an extremely affable raconteur, and his stories are always engaging – I haven’t seen his work for a few years, and it was great to be part of the audience.

I was on after Rich. I’d decided to get into the traditional spirit by performing without notes. In the minutes before going onstage, my nerves were worse than ever, but I settled fairly quickly.  I read two stories I’ve been practising lately – Circle Stone and The Lion Tamer’s Daughter.  I stumbled once in Lion Tamer, and for a moment I thought I would go entirely blank – but I recovered, found my place and delivered the rest without a hitch. Circle Stone is an extremely quick flash piece of only 75 words, and it’s surreal enough to counter the darkness of Lion Tamer. The two work well in combination, but I’m going to semi-retire them now. They’re both destined for my flash fiction collection Marrow, and I’ll try and get them published elsewhere first, but I’ve read them a lot recently, and it’s time for some new material. On reflection, though, the reading went well. I don’t think I’ll make a habit of performing without notes, but Dreamfired was a perfect place to give it a whirl.

After me came a poet, whose name I didn’t catch, who read some playfully nostalgic pieces; and then a story about a 21st century Grim Reaper. Bill Lloyd returned to round off the first part of the night with another couple of songs – his cover of Frankie’s Gun, which I absolutely love – it was Bill who introduced me to the music of The Felice Brothers – and one of his own compositions, a haunting Armenian lament.

After the interval came Emily Parrish, aka Scandalmongers. She walked onto the stage singing and beating a drum, and launched without preamble into the Norse creation myth. Her show explores the role of Loki, the trickster god, and all his jealousies and cruelty and fun. What made the show all the more remarkable was the way she entwined Norse mythology with her own childhood. The transitions between the Cotswolds and Asgard were frankly astonishing – from the top of a perfect climbing tree to the horrors whispered into Baldr’s troubled brain. It was lyrical, visceral and intense, and it left the audience stunned. 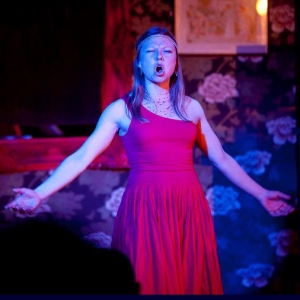 Loki comes highly recommended from me – catch it if you can.

Thanks, too, to Kat Quatermass, who organises and hosts Dreamfired. Lovely to meet her after months of email contact. I’m definitely going back in November to catch Peter Chand performing Grimm’s Sheesha.

What’s next for me, then? I’ve been thinking about my novel edits for a week or so – a process I refer to as ‘brewing’ – and I’m almost ready to start work. I mentioned in a previous post the structural changes I need to make, and my uncertainty about how to make some of those changes. That has passed. I now know where that character is going to enter the story. Although it means a lot of work, I feel secure in the knowledge of how to do it, so a lot of that worry has eased.

My next booked reading is at the Brewery’s Spoken Word night in February, though I’ll try and land a few more open mic spots before then. Stay tuned. And go to Dreamfired. 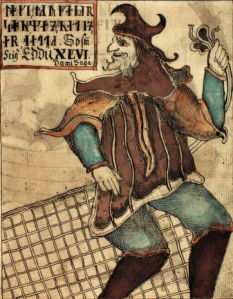 On Friday 11th October, Dreamfired takes over Brigsteer village hall for a night of traditional music and storytelling. I’ve managed to land one of the support slots for headliner Emily Parrish, aka Scandalmongers. She’s retelling the classic Norse myth of Loki, the trickster and troublemaker at Odin’s court. Her show has received amazing reviews, and I’m really excited about seeing her perform live.

I’ll be reading two short pieces I’ve been practising live – Circle Stone and The Lion Tamer’s Daughter. I wanted to get into the spirit of the night by performing from memory: no notes, no paper. Reading them at Spotlight and Spoken Word has been good for practising their delivery. I already know Circle Stone by heart, and I’m four-fifths of the way there with Lion Tamer. The prospect of reading live is not yet as scary as it will be on Friday afternoon.

By dumb chance, my storytelling uncle Rich Sylvester is up in the Lakes for a workshop that weekend, so he’s coming along too – and I’ve just discovered that legendary Cumbrian singer, songwriter and banjo maestro Bill Lloyd is playing as well. It’s a blinding line-up, and I feel a little overawed to be reading at such a great event. I’m looking forward to sharing my stories, then sitting back with a beer to enjoy a great night of tall tales and folk music…

What a couple of weeks. The start of college has been a bit rough, but we’re getting there. I’m spread fairly thin at the moment, and it doesn’t feel like I’m getting much done… but in the background I’ve completely redrafted my flash fiction collection Marrow, so that’s ready for typesetting when I find the time to get to grips with InDesign. Paragraph Planet published a 75-word story from that collection last week, too, which is pretty cool. I’ve also redrafted the longer short story I talked about in my last post, and started blocking out my new novel in the excellent Scrivener.

Even more exciting, Riptide is beginning to gather pace. I’m expecting notes from my editor this week, so I can start work on what should be the final draft, and I’ve just had a sneak peek at a rough of the cover art, which is scintillating. While I’ve been so busy drowning in real life, just trying to stay afloat, seeing the cover has been a timely reminder of what I’m working towards. The artwork is simply perfect, but I’ll wait for a final version before I share it.

The 200th Spotlight Club in Lancaster is looming on the horizon. It feels like only last week I was reading at their open mic night. I’m excited about performing there again, and hopefully catching up with old friends Rich Turner, Dan Haywood and Paddy Garrigan (pictured above) – Paddy’s playing out the night, which should be a blast. I have two or three new pieces lined up. I’m going to start with a short story about guinea pigs, and finish with a very short 75-word piece about avocados. I think there’s probably time for another story in between, but I haven’t decided what just yet.

After Spotlight comes the Brewery open mic, if I can get a spot, and then Dreamfired in October. By happy coincidence, my storytelling uncle Rich Sylvester is up from London that night. I don’t get to see Rich very often, so if we’re organised enough, I’ll try and knock up a quick video of one of his stories.