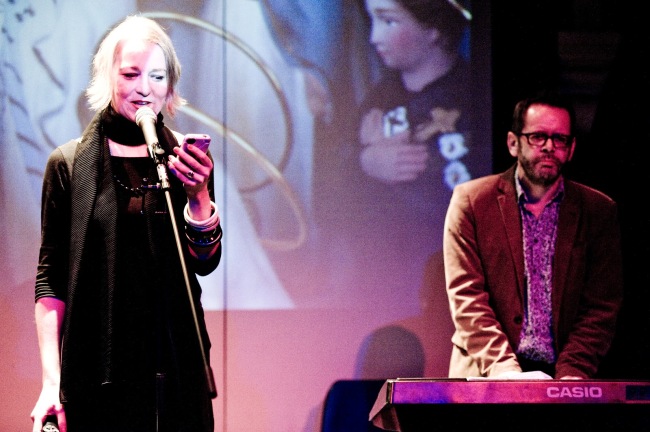 It was a brilliant little show, with Sarah-Clare reading flash fiction accompanied by David’s Wurlitzer-style noodlings and extremely funny PowerPoint presentations switching slides in the background. The stories were fantastic – by turns poignant, reflective and darkly comic.

I especially loved the story about Eggborough power station, where the narrator paints the chimney stacks – and ‘Little Jan’, which is a perfect slice of poisonous office politics.

It was also great to see Sarah-Clare and David so soon after Flashtag – with the swifts soaring overhead and the sunset tinged pink over the Lakes, we had a balmy chat about day jobs, notebooks, Italy, the amazing Scottish literary scene and the quest for decent pubs in Kendal. (If you want an answer to the last point, there are three: Burgundy’s, the Brewery, and the Rifleman’s Arms.)

Before they turned up, I sat scribbling in my notebook. After a mini-brainwave about the protagonist in my new novel, I now know what she’s called and what she does for a living; and that in turn revealed another layer to the story which I’m really excited about. I also worked through some potential titles, though nothing stuck. I’m going to be flat-out on film jobs and college for the next month, but I’m starting to assemble more notes and ideas all the time.