BigCharlie Poet (the nom de guerre of Simon Hart) and I have been trying out a picture-based flash fiction vs. poetry writing challenge. In case you missed it, here’s round one: Cathedrals.

It was Simon’s turn to choose a picture, this time, and this is what he chose: 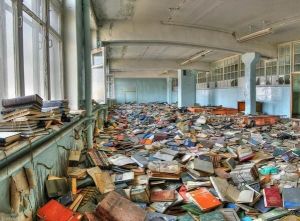 I found this one very difficult. With Cathedrals, I had the story in an instant, and writing was a cruise, but this has taken some working around. I guess that’s the way with writing. I can’t turn it on like a tap. Sometimes the stories shimmer into view as though they’d been there all along, and sometimes they come word by word, kicking and fighting, refusing to stay on the page. This one’s been a toughie, and I’ve tried it three times. My first attempt was an illiterate dystopia where an old man found a book he couldn’t read. It spiralled very quickly, and I abandoned it at 600 words. My second attempt was about a haunted library, and that was a little better – I think I can rescue it for a short story – but it wasn’t good enough for this, and I hadn’t the heart to stick at it.

I have written a previous piece that fits this picture exactly, which doesn’t help. The abandoned library is a perfect representation of one of my Twitter shorts. Struggling to get that story out of my head, I posted it again in the hope of exorcising the blasted thing. It looks like this:

Having sent that back out into the big wide world, I did feel a little freer, but it wasn’t until I discussed the picture with Mon that I came up with my final idea. She imagined the books dropping away into nothingness, and that was the spark I needed. Time and time again, Mon reminds me of the stories I like to tell the most. She keeps me on track when I’m getting lost. With that image in my head, I sat down and wrote the final piece fairly quickly. It’s the middle of something much bigger, I think. I can see this growing into a novella or even a novel, given time. I’m not done with the characters.

Simon Hart found this one tricky, too, which is a relief. It’s taken both of us longer than the fortnight we’d agreed, but then, hell; we’re busy people. This is what Simon has to say about it:

“Well, it’s finally been written and this has been difficult! I saw the picture and thought it was interesting, suggested it and went ahead with it as the challenge piece… ignoring the fact I have written creatively about libraries before. What it has meant is that those pieces of work have been clamouring at my brain to be let out again. I have refused them, and eventually created this new poem, but not without help. The title and line relating to it come from my Dad pitching me a line far greater than anything my feable mind was coming up with, and I finished only because I cheated and read Simon’s excellent entry on the same photo. Cheers gents.”

There were books strewn everywhere
Left without much apparent care
Though some were in bundles, others in stacks
Most were just left to cover the cracks
In the old dead library’s floor

The words on the pages, scattered like dust
Engines of thought now turned to rust
Childhood stories being lost by the hour
The Tempest losing so much of its power
From the old dead library’s floor

They once taught us magic, and fanciful tales
Told us stories of mad Captains hunting white whales
Taught that being obsessed was a kind of disease
That carried you away on angry dark seas
Not the old dead library’s floor

But now they do nothing, we won’t let them teach us
And where they sit they will struggle to reach us
Abandoned and now out of our sight
They are doomed to their own perpetual night
On the old dead library’s floor

And here’s my response:

The creature stepped out of the darkness and into the candlelight. It was smaller and far slighter than Morag, and carried itself daintily, as though it was frightened of breaking a limb. Its tiny eyes were black pinheads in the cloth. It had a ragged hole for a mouth. It smelled like coal sheds.

It led her to a door.

“In here, my pet,” it lisped. When it talked, stuffing spilled from the corners of its mouth.

In jerky, spastic movements, it opened the door to the library, and daylight spilled into the gloom. Squinting in the light, Morag peered beyond the creature and saw a vast room. The floor was entirely carpeted in books. Books, books and more books, gathered in loose stacks, strewn by the dozen, piled up in the corners.

“All of them?” she whispered.

The creature’s smile wrapped around its head. Morag heard stitches popping as it grinned.

It turned the hourglass again, and the sand began to flow.

Morag slung her knapsack, took a deep breath and brushed past the creature into the library. She stumbled to the top of a nearby stack and surveyed the room. The door creaked shut behind her, and the creature’s smile receded to a single line as it melted into darkness.

She was alone in the library. Before her, books lay scattered in their thousands.

“But where to start?” she murmured.

She took a single step, and then she heard the slithering. It was so faint at first, ghostly whispers, but gathered to a rush. Morag scanned the room. The books in the middle were moving. They revolved, and more volumes fell inwards as they shifted, gathering momentum. They spiralled, forming a circle and starting to drop into the floor. It was spreading outwards, increasing speed. It was a whirlpool. With a jolt, the stack beneath her shifted, throwing her to the ground. Morag fell headlong into the torrent.

The daylight closed overhead, grey and fluttering with loose pages. Books battered and struck her as they ground and jumbled in the gyre. The movement was inexorable, dragging her down, dragging her into the centre. Her feet lost contact with the floor and then it all dropped away and Morag was falling, flying, plunging into nothing as the books tumbled all around her. She panicked, flailing and groping for contact, anything to arrest her fall. There was nothing to hold on to. The space beneath her and around her was empty entirely, a sea of nothingness stretching on forever. Books fell around her like rain, covers flapping and pages rippling. As they fell, Morag realised they looked exactly like the sand in the timer.

In a heartbeat, she remembered what Badger told her: about time. About the creature. About this place.

She took a deep breath, shut her eyes, and reached out. Her hand closed around a book. Still falling, she opened her eyes, and turned to the first page. Morag began to read.