On Saturday, I had the guest headline spot at Verbalise at the Brewery. It was an amazing night, for all the squirming terror I went through in the days before the show. It’s strange to get so nervous before a reading. As a teacher, I address large groups all the time, but everything changes when it’s my writing under the microscope. Usually, it goes like this: in the hours before a reading, I feel a pain low in my stomach, and then my throat grows tighter as those hours dissolve into minutes. When I walk onstage and begin to read, my heart pounds in my larynx. At last, around halfway through the reading, or halfway through my second piece – whichever comes first – something changes. In a matter of heartbeats, the nerves are gone, I calm down and enjoy the stories, enjoy the sound of my own words. My grail is to achieve that sense of enjoyment at the start of the reading, rather than the mid-point, and Verbalise was a big step in the right direction.

Before I talk about my reading, I want to sing the praises of the open mic. It was an absolute cracker, kicked off by flash fiction guru Brindley Hallam Dennis. I’m a huge fan of Brindley’s stories, and it was a thrill to see him performing again. He started with another of Kowalski’s Assertions, then read a gem of flash fiction called The Right Words, which looks like this:

After Brindley, I was doubly delighted that my photo challenge sparring partner BigCharlie Poet came north for his first Verbalise open mic. He read two of the poems from our challenge series – Cathedrals and Graffiti – which were even better in person than on the page. He was so good that compere Ann asked him back to headline later in the year. Another future headliner was at the open mic, too, in the glorious form of Joy France, and it was a wonder to witness her at work – she performed a wicked little flash piece and this scintillating poem:

The open mic also featured ace local poet, journalist and painter Helen Perkins, who read her poem for the Drowned Villages competition. South Lakes poet laureate Kate Davies performed a sinister piece about a caul-shrouded something that nipped at children and crunched their bones, and Luke Brown read a twisted tale of flooding and infanticide. Friend Harriet Fraser read three poems, including the exceptional ‘Michael’ from her project Landkeepers. This brooding piece sees the departure of an experienced farmhand from a remote Cumbrian valley, much to the regret of the farmer who worked with him – set against the Sisyphean job of plugging holes in drystone walls. It’s a beautifully bittersweet metaphor.

Finally and brilliantly, one of my best and oldest friends, Steven Malcolm, had come up for the weekend as well. Steve is a wonderful writer, but had never performed his work before. Verbalise marked his first ever open mic. He read two short stories – the first about a bystander struggling to process the accident they’d witnessed, and the second about a man who married a Volvo. They were dreamy, dark and very good.

After the interval – oh, lawks – it was my turn. I gabbled my way through a hapless introduction, and then I started reading stories from Marrow. For all the fear I’d endured throughout the day, I found my groove fairly quickly. I started with The Black And The White Of It, then read Hutch, then new piece The Jubilee Best Cake Competition. I’d originally planned on performing this last piece with an accent, in the style of a well-to-do Yorkshire dear (more like Alan Bennett, probably) but I bottled it at the last moment. I’ll try and summon courage at my next open mic. Maybe. After those three stories, I made a rare switch to poetry. I read Was I Scottish, which is about the dissonance I feel at being Scottish/English/British/whitever, and then my own entry for the Drowned Villages competition, which is called Coffin Routes. Both seemed to go over quite well. (Curiously, I found the poems much easier to perform than the stories. I’m still not sure why, given how fundamentally unsure I feel about my poetry. I’ll brew on this a wee while longer.)

After the poems, I went back to Marrow. I performed the title story, which I’m pleased to say elicited palpable disgust in the audience, followed it with Circle Stone, then finished with the elegiac After The Rain. I garbled something about my book and my blog, and then I fled the stage. I sat in my chair and stared at the floor for many minutes. I struggled to swallow.

Here’s the thing. I think it was a good set. But I have no idea of the passage of time for the duration of the performance. I have no idea if I was up there for three minutes or thirty. Quite sincerely, I cannot comprehend how much time went by. My brain eliminated the tick of the clock, sacrificed to a balance of performance, finding the microphone, reading the book, reading the audience, judging myself, monitoring my breath and not falling over. I needed to recover.

Afterwards, still calming down, I nattered with friends old and new. I discovered that the event had sold out, which is most excellent – the Warehouse was over capacity even before a few more folk snuck in to stand. I also sold eight more books. A quarter of my hundred copies have gone in the first week. (If you’d like one, wander this way.) Even better, compere Ann The Poet has asked me back to headline again in 2015.

Despite the terrors of anticipation, I had a good time. The expansive open mic and the positive response to my own work left me feeling great about stories and writing. I still wish there were more events and open mics in South Lakes – I look to the scenes in Glasgow and Manchester with envious eyes – but what we have in Dreamfired and Verbalise is pretty special.

Here’s a picture of me juggling a pint, a poem and my copy of Marrow. 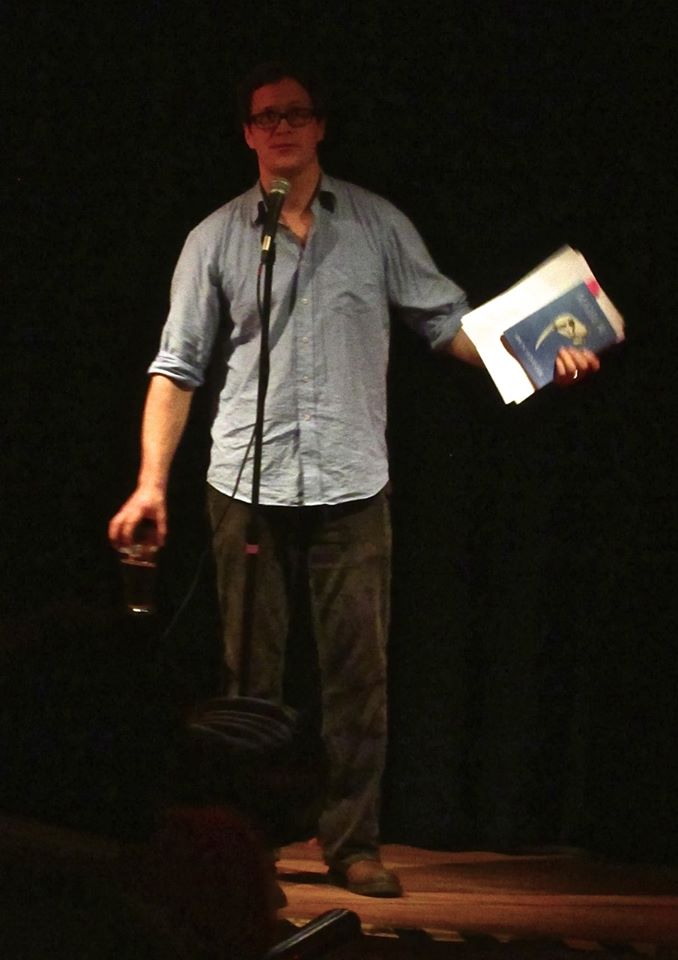