The Visitors is a little bit about selkies. Selkies are seals, and they are also people. They have a fur coat that allows them to take the form of a seal. When they step out of the coat, they become human. Selkies can be men or women, but they are always extraordinarily beautiful.

There are a multitude of selkie stories, but the most common starts with a selkie woman removing her coat and dancing on the shore. A young man – usually a fisherman or crofter – spies her dancing, and steals the coat. With her fur held hostage, the selkie has no choice but to marry the man. They live together for a while, but then the selkie finds her skin and escapes back into the sea. The man is left to nurse a broken heart. Often, the couple have children. In some stories, it is a child that finds the coat, and returns it to the mother. Sometimes the selkie takes her children back into the ocean, and sometimes they are left behind. In that version of the story, the mother and children meet in the surf to play.

In the other typical selkie story, an island woman cries seven tears into the sea to attract a selkie mate. Selkie men give children to barren women. 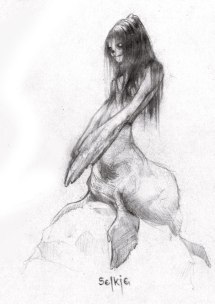 I love the idea of selkies, but I struggle with some aspects of these traditional stories. They crush female independence. In the first, the selkie is kidnapped and loses years of her life to captivity. The man takes what he wants, and is punished only by the accident of her escape. In the second story, the male selkie is a god, and the woman summons him on bended knee. Either human men dominate supernatural women, or supernatural men dominate human women. Both men and women mean more to me than that. When I started writing The Visitors, I wanted something different from selkie stories. I wanted equality. That’s been my guiding light for the novel, from start to finish. John and Izzy share traditional tales, but Ailsa and Flora question the validity of that tradition, and take a closer look at what it means to be a selkie.

Selkies are special. I watched the seals hunting in the bay at Grogport, and saw them bask and splash in Portnahaven harbour. There is life and knowledge in their eyes. When you look at them, they look back. On Kintyre, we walked the coast around Skipness on a grey, steely day, and we were followed by a seal. For half a mile or more, as we skirted the coast, the seal stayed twenty or thirty yards away from us. It seemed to move without locomotion, so that dark snub head simply kept pace with us, looking towards the shore. We sat on old stones to eat our lunch, and the seal bobbed and ducked at one end of the headland. It didn’t move away until we struck back inland, and then it vanished in a wink. I looked back to seek it out, but the seal had gone.

I asked my friends about seals and selkies, and they swamped me with stories. Chris gave his first pocket money to Save The Seals. Tom talked to the seals in a sealife centre, and the seals talked back. Dan’s friend confused swallows for seals in a dream, so he drew her a picture of a swallow with a seal’s head. Kirstin’s father whistled to the seals in Shetland, and they popped to the surface to see what all the fuss was about. Jon was kissed by a sealion. Sakina can’t shake the tale of the seal maiden. Ross works in Copenhagen, and daydreams that commuters with sealskin coats are modern-day selkies. Amy holidayed on Mull when she was seven, and spent the summer playing with a selkie called Della.

Why do we give seals such humanity? They are manifestly foreign to us, but the connection is overwhelming.

When I was 25 or 26, I spent a year working and backpacking in Australia. I remember snorkelling on Ningaloo Reef, diving as far down as I could go. I looked up exactly as the sun dropped behind a cloud. The water turned suddenly cold and pressed against me, and I felt very afraid, scared of the deep and the dark and the cold and the blue. When I think of selkies, they are underwater, floating with perfect neutral buoyancy, and shafts of sunlight sway woozy on the surface above. The darkness drops away behind them, and the selkie exists in two places: as a seal, utterly unafraid, and as a human, drawn against the current, compelled to the surface. Selkies live in thresholds. The selkie woman, when she escapes, returns to embrace her children in the surf. The shoreline, changing always with the tide, is where seals and people meet as selkies. It is a nowhere place, and yet it is all they have.

A hunter doesn’t know his wife is a selkie. While hunting, he sees her as a seal, and harpoons her. She becomes human, and dies in his arms.

The crofter is left heartbroken on the shore, and his selkie wife returns by stealth to see her children.

This selkie is allowed only one night of the year to be human.

Two lovers share a single skin, so that they can never be together in the same form; always one as a seal, and one as a human.

Selkies are born from the souls of drowned sailors.

Selkies are cousins to the muc-sheilche, the kelpie, the nokken, the finfolk. Those creatures are killers and enemies to men. So what makes the seal a victim? A romance? A tragedy?

When we visited Islay, we drove out to Portnhaven. We clambered across the rocks to the weedy edge of the harbour, and we watched the seals. Half a stone’s throw across the water, they gathered to sunbathe by the dozen. They winked as though the Atlantic was a hot tub. They flickered in the water, phantoms bound in straps of kelp. They came so close that I found myself laughing aloud – laughing in wonder, joy and disbelief.

When I started writing The Visitors, I wanted to explore that connection with the seals, that projection of knowledge, and emotion, and empathy. I don’t know if I succeeded, but I’ve fallen more in love with seals and selkies.

My wife found this picture of a seal. It was taken in California, rather than Coll, but it’s the way I see a selkie. Curious and cautious, incredibly close, and impossibly distant. 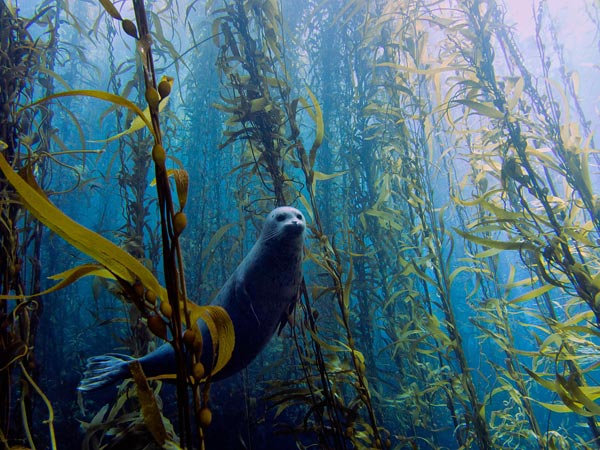 4 thoughts on “A sealskin coat”