This year has been both breathtakingly excellent and occasionally extraordinarily hard. I’m focusing on the good stuff though, because we’re all spinning through the mind-boggling vastness of space on a giant oxygen machine and really, when you think about it, where’s the sense in dwelling on the rough?

So here we go; in no particular order:

1. The Visitors being published

The culmination of two years’ work and the start of an awful lot more to come; in June, the wonderful folks at Quercus Books were kind enough to publish The Visitors. I wrote about the publication here, and it kept on running. Somehow, people keep enjoying it. I’ve summed up the reviews here, and there are reviews from actual real life readers on Goodreads and You-Know-Where. Writing was hard, editing was very hard, and now it’s out there in the wild – it doesn’t need me any more, if it ever did. I haven’t really come to terms with the book being published, other than it makes me scared, humble and really, really happy. Writing is all I want to do, but sometimes every step feels like the first step. 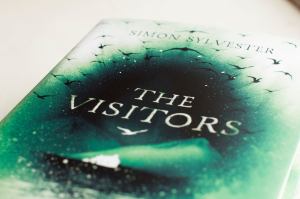 In the twelve months – to the day, madly – since I started, I’ve probably written about half The Hollows. Unfortunately, for reasons like this and especially this, I’ve had to cut gigantic chunks of it; so much, in fact, that I’ll basically have to start again next year, and crib the pieces I can still use from the manuscript. This would be a very bad thing, were it not for how excited I am about those pieces that are left. It’s been bruising, definitely, but the process is now beginning to tip me in positive directions I probably wouldn’t have gone by myself, and that’s terrific.

Over the last two years, I’ve been trying to read more of my work aloud; I pushed myself further this year by entering a story slam in Manchester. I memorised my three stories so I could concentrate on performing them, rather than reading them, and I was lucky enough to win. That was great, and I was delighted, but what really blew my mind was the culture of live literature I witnessed in Manchester. It’s raw, it’s funny, it’s friendly, it’s immediate. It’s everything short stories and poetry and flash fiction should be about, and it completely affirmed the value of storytelling as an act of community. Stories are a thousand things, and one of those things is churches.

Way back in February, I attended a clowning workshop run by Belgian storytelling maestro Fred Versonnen. This is the best £25 I’ve ever spent, and it’s true to say that my life hasn’t been quite the same ever since. I see things differently now – I write differently now.

5. The Year Of The Whale

I started this novella more than five years ago. Getting it finished was a thrill – I surged through the final chapters, and I’m pleased with it. It still needs redrafting, but I’m not quite ready to get back into it. It’s waited five years – it can wait a little longer.

Finishing Marrow was another big deal in my writing year. I haven’t written as much flash fiction this year, because I’ve been mentally wasted from work, and that kinda gets in the way, but I did, finally, finish and self-publish a flash fiction collection called Marrow. Of the hundred I printed, I have about twenty copies left, and people seem to like it, which is a source of constant wonder. I wrote about my decision to self publish here. I sent a copy to the excellent Cerys Matthews, and because she’s absolutely awesome, she read out one of the stories on her BBC6 Music show. This is, and will always be, the coolest thing that ever happened to me.

Gig of the year, hands-down. I wrote about it here, but in summary, Gruff was majestic, wise and funny.

One of my favourite ever holidays. A week of sunshine, warm evenings, seashores, swimming and the boundless comedy available on tap from my daughter Dora. We had a fantastic time: ruins, eagles, Mythos and pizza. I love holidays because I’m with my favourite people, I get to read a lot, and I get to think a lot. It went like this.

It’s been another good year for my friends. Iain Maloney published First Time Solo, his excellent debut novel, with Freight Books; also with Freight, Anneliese Mackintosh’s debut novel/story collection/autobiography Any Other Mouth was released to stupendous acclaim, going on to win the Green Carnation Prize; Salt published one of my books of the year, The Rental Heart by Kirsty Logan; Kirstin Innes landed an agent and then a publishing deal for her debut novel Fishnet; and I was lucky enough to read a draft of Ali Shaw’s new novel, The Trees, which is simply scintillating. I’m delighted that Bloomsbury are going to publish it, because Ali is a wonderful human being, an outstanding writer and a great friend.

Just amazing. We did damn near all of it ourselves, and when I say ‘us’, I mean that I did 10% after I’d finished work, and my tireless, hilarious, wonderful, perfect new wife Mon did the rest. It was a lot of work to pull it all together, but we basically hosted a mini-festival in a back garden with a marquee, a stage, a band, a PA, scores of hay bales, lighting and decoration. We then partied till the following morning with our wonderful friends. My brother gave what was widely considered to be the best best man’s speech anyone had heard, and local legends Seven Seals played their very finest. It was phenomenal. What a day – a thousand thanks to everyone who brought it all together.

Mon is my everything, and I’m beyond proud to call her my wife.

So there we go. It’s been a good one, despite the harder stuff. Some of the things that have knocked me hard – like the Hollows, like the Scottish independence referendum – will come around again, and next time we will get them right. And other things – like working too hard – will change, because they have to.

Dora’s gone to bed. This is the first year she’s been old enough to really understand what’s going on. We helped her write a letter to Santa, which she signed herself, then made sure to leave a whiskey for Santa. (Jura, in case you’re asking. Santa’s quite particular about that.) I read her Where The Wild Things Are, and we roared our terrible roars, and gnashed our terrible teeth, and she asked me what the words mean: “…and …it …was …still …hot.”

These are the moments we’re working for.