Here be spoilers. Don’t say I didn’t warn you.

I teach films, I make films, but I very rarely get to watch films. So it’s with great pleasure I sat down tonight with Down By Law, the Jim Jarmusch prison/buddy/road movie in which Jack, Zack and Bobby find themselves sharing a cell. It’s hard to switch off teaching mode, and about a third of the way through, I found myself idly wondering why it had been shot in black and white…

…and eventually decided that it was because it’s an existential story. Suddenly, the rest of the film swam into focus. All three are in prison for morally uncertain reasons — Jack and Zack have been set up, while Bobby’s manslaughter was a freak accident. Their situations are anything but black and white, so to render their world in high contrast B&W makes a nonsense of their injustice. As it unfolds, the film feels more and more like a Beckett play, the pointlessness playing out in theatrical, meditative wide shots — I don’t remember a single close-up in the entire movie.

Much of the story occurs as loops of nonsense — Bobby reciting American poets in Italian, or Zack recording the passage of days in fives or sixes or sevens, some vertical and some horizontal, none of them in any particular pattern. In the scene below, the three walk in endless circles — “I scream, you scream, we all scream for ice cream!” — while the other prisoners bellow the song along with them. It’s the only time they’re completely of one mind, and it’s over something pointless and completely unachievable.

The cabin they escape to is a mirror of their cell, while the Louisiana swamps unfold in circles. When they argue over the rabbit, Zack leaves to the right, then appears walking to the left — while Jack leaves to the left, and then appears walking right — and still they end up back at the campfire. On reaching the road — “Civilisation!” — both directions are identical and endless and pointless. 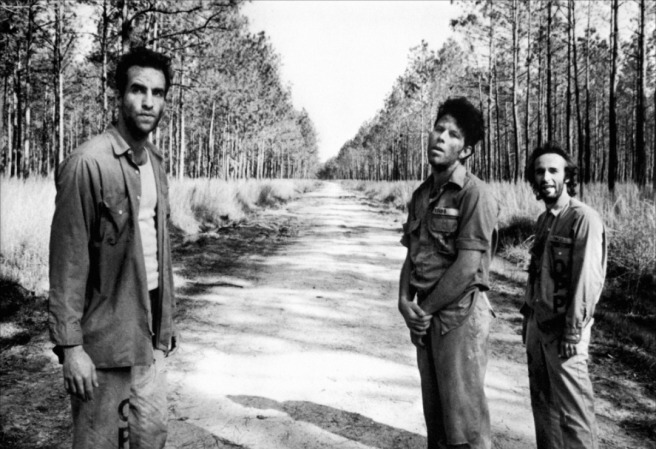 When Jack and Zack finally go their separate ways, they have literally no idea where they’re going — only that each needs to go away from the other. As solemn as Vladimir and Estragon, they swap jackets before walking away, right and left. I had the sense that they’d probably end up in much the same place they started.

Not Bobby, though. Bobby goes through life with an open heart and an open mind. He talks to people, he wants to communicate, and so he reaps the rewards of food and wine, a roof and a song, love. For all his nonsense, there’s a bigger meaning behind Bobby’s story — he perseveres through the babble of his world, and so he earns his happy ending. It’s all part of the joke that he’s the one who likes to speak — and it’s in a language no one understands. 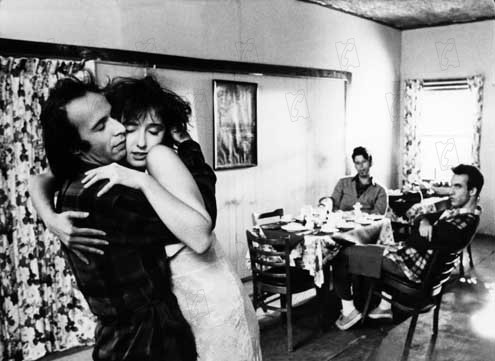 One thought on “Down By Law”